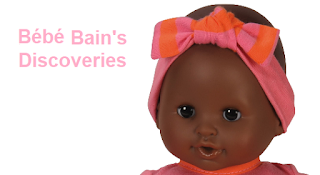 In September 2016, I was asked to write an article on black bathing babies.  The article incorporated information on both black and white dolls designed for water play using Corolle's Bébé Bain Graceful to explore past and present dolls of this type.  The abridged and otherwise edited article was published in the 2017 UFDC Convention Souvenir Journal, Une Journée de la Poupée.   Because of the extensive research involved on my part and my desire for the entire article to be published and read, the unabridged version, with a modified title and full credit to all who graciously submitted photos and information is published here in four parts.  Photo credits and references are included at the end of part four.

Upon her arrival to become part of her adult’s extensive, vintage-to-modern black-doll collection, Bébé Bain Graceful (also known as, Bath Baby Graceful, shortened to Bébé by her adult), wanted to know how many other dolls designed for bathing preceded her to the collection.  Her adult regretfully informed her there were very few others like her in her new home but offered to provide information about other bathing dolls, past and present.  With the use of Internet searches, doll reference books, merchants’ catalogs, and vintage advertisements, Bébé’s knowledge about other bathing dolls was enriched.

Bebé, by Corolle of France, was designed for children 18 months and older as a 12-inch vinyl doll with cloth body.  Before she took her trip down bathing-doll memory lane, Bébé shared information about herself, “I was born in 2015.  My rubber duck and I are ideal for bath time play.  I can float and my sewn-in hanging tab allows me to dry quickly after each bath.  I am a favorite playtime mate out of the tub, too.”  (This description and the notation that Bébé was manufactured for and imported into the US by Mattel are actually from the doll’s box.)

Before their research began, Bébé’s adult explained to her that little girls have always loved caring for their dolls and imagining how much their dolls love bathing.  The little learner’s excitement intensified.  She was happy to know how much children, many of whom have witnessed younger siblings being fed, dressed, diapered, and bathed, enjoy performing these tasks with their dolls.

The little doll student’s introduction to bathing dolls began with dolls from the 1920s to contemporary dolls manufactured specifically for bathing and others made of water-safe mediums.  She learned that many of the earliest “bathing” dolls, or dolls that were described as washable, were made of mediums that today are known for their inability to withstand moisture, such as composition and bisque.  Bébé was delighted to learn that rubber and vinyl dolls were better suited for water immersion in bathinettes and tubs with their included accessories of soaps, sponges, washcloths, and bath toys.

Manufacturers of bath soaps such as Ivory, Johnson’s, Lifebuoy, Palmolive, and Pearl, along with makers of other skin care products, for example, Kleenex and Q-tips, often teamed up with doll manufacturers to produce mini versions of their products to include with bathing dolls.   In addition to bathing dolls, Bébé learned about bath toys and accessories that promoted good grooming habits in children.  With her excitement escalated further, she prepared herself for a wealth of learning.

The next three paragraphs outline additional facts Bébé’s adult explained to her, which should be noted by readers of this article as well.

White dolls of any kind have always been more plentiful than dolls that represent other ethnic groups. It was not until the 1970s that doll companies became more inclusive in their product lines.  Exclusion created a scarcity of black dolls of all types including bathing dolls. When a black version was available, this article notes it.  No mention of a doll’s ethnicity in the absence of an associated photograph indicates the doll was white.

With a couple of exceptions, the chronological order of manufacture is followed.  When a doll’s years of production lapse over the next featured doll’s market introduction, and when bathing dolls by Horsman are explored, the chronology is interrupted.


Many dolls were available by mail order through catalogs from Sears, Roebuck and Company (SR&C); J. C. Penney, and Montgomery Ward among others.  Some dolls were store exclusives.  In many cases, these merchants omitted the names of the dolls’ actual manufacturers and frequently replaced the dolls’ original names with similar names or adjectives to describe the dolls.  This was done in the SR&C catalog for 1923 with a doll described as Dolly and Outfit of 23 Pieces, a repeat from their 1922 catalog where the doll was described as 23 Pieces in Her Outfit. This 7-inch composition doll with bisque head came with everything for imaginative doll play along with a cardboard box for storage.  Pretend bathing could be done with the towel and imitation soap that were included in its 23 pieces.  This doll was reoffered in the company’s 1924 and 1925 catalogs.

After making note of the doll from 1923, Bébé’s introduction to other bathing dolls continued with dolls from the 1930s through 1940s and there were several.

In 1931, Horsman’s Latest Big Doll Success (although made of composition) included four dolls: 12-inch Babs, 14-inch Sue, 17-inch Jane, and 20-inch Nan.  Described in the SR&C catalog of 1931 as having washable bodies, which was written on their gift boxes, the dolls could sit alone, hold many poses, tilt and turn their heads, and move their arms and legs.  Babs’ and Sue’s catalog descriptions do not mention bathing, but Jane’s description indicates her “body can be washed.”  “Nan can be bathed,” is part of the largest doll’s description.  How well their composition held up after their little mommies washed and bathed them is unknown, but their popularity continued through 1932 when they reappeared in the catalog for that year.

Baby Darling, a nude 8-inch rubber doll with a one-piece body, was advertised for fifty-nine cents in the 1931 SR&C Catalog without accessories.  The description (“Made of flesh colored rubber.  As soft to touch as a baby’s arm—unbreakable and light.  Will stand, wash and float…”) is a testament to the doll’s ability to be bathed by a child and/or its usefulness as a bath toy.

1932
In 1932, offered by SR&C by mail order, described as “Just Loads of Fun,” an 11-1/2-inch composition baby doll priced at one dollar, was presented in an oval-shaped cardboard box with cover and handle.  Accessories included everything a child needed to dress, feed, and bathe the doll:   “pillow, blanket, lace-trimmed dress, bonnet, rubber pants, stomacher, sponge, soap, and nursery bottle.”

Under the description, “Soft Unbreakable Dolls,” a 10-inch baby doll with all rubber body made of “newly developed sanitary ‘Health-Gard’ rubber” was advertised in the 1932 SR&C Catalog.  Its rubber construct gave it the ability to be “ducked in tub without injury.”  Parents had few worries about water damaging these dolls as their children derived many hours of delightful play bathing them.

Ideal’s Honeysuckle with “Truflesh rubber body, arms and legs” was advertised in the 1932 SR&C Catalog. Available in four sizes:  10-1/2-, 12-, 14-, and 16-inches tall, the ad touts, “Children love to wash her soft, smooth and rosy rubber body, arms and legs that feel like a baby’s own.”   Squeezing her legs activated her squeaking sound.  The doll’s composition head probably prevented complete submersion.   Honeysuckle returned in the 1933 SR&C Catalog along with Ideal’s Ducky.

Available in the same sizes as Honeysuckle, Ducky had rubber body, arms, and legs, and as the 1932 ad illustrates, could be bathed like a baby.  Reappearing in the 1934 catalog, Honeysuckle was advertised with new “rolling eyes” and was all rubber.  Ducky was all rubber by this year, too, available along with “A Colored Baby,” Dusky.  Offered only in the 11-inch size, Dusky’s price was only one dollar.  “Dressed in a diaper, she’s all rubber, head to toe, so you can bathe her as often as you please,” read Dusky’s description.  It is possible that Dusky is one of the first black dolls advertised as a bathing doll that could be fully submerged in water.

Advertised in the 1934 SR&C Catalog on the same page with Honeysuckle, Ducky, and Dusky was a “Dolly and her Bath Outfit!  She brings her own bathinette with her and a sponge, tiny washcloth and soap!  Just fill it with water and put her in; she’s rubber up to her hard-to-break composition head.”  This doll was 10-1/2 inches tall.  Included were a vest, slip, lace-trimmed dress, and bonnet.


Honeysuckle and Ducky remained popular for several years.  A variety of versions appeared in the 1935-1938 SR&C catalogs.  In Collector’s Guide to Ideal Dolls Identification and Value Guide (Collector Books, 1994) Judith Izen describes Honeysuckle Baby, a 12-inch drink and wet doll with hard plastic head, rubber body, arms, and legs, which was made from 1949-1950.  A “Negro” version was also available.   Bathing accessories were not mentioned, but because of Honeysuckle Baby’s rubber body, arms, and legs, little mamas certainly enjoyed bathing this doll, too.

Earn Cash Back Shopping Through

Black dolls are my passion, my drug of choice. They renew my spirit!